In the “be careful what you wish for department,” I went to the hospital yesterday afternoon and was told that my training program would begin even before surgery, as in immediately!  However, I will not start the six-hour-per-day program until the surgery, because the neuropathic pain is still too intense during the afternoons.

I woke up at 5 AM this morning in order to get to the hospital by 8 AM where I was met by the entire rehabilitation staff and patients for a 15 min. English lesson, which I am to help teach five days a week.  I was a little startled rolling into an entire roomful of people waiting for me to teach them something. I decided to stick to the topics of gym and rehabilitation vocabulary. I taught the phrase “to pick up one’s leg” this morning, and I had my sister write the characters on the whiteboard for me, which I must say she did very well since it was first time she had ever written a Chinese character in her life. I had the entire group repeat the sentence back several times, and then they all cheered for me at the end of the lesson as if I had solved world peace or something. I thought this was quite adorable, but things quickly got more interesting.

All of a sudden I am pretty sure the Chinese national anthem started playing and the entire rehabilitation group broke out in a dance/stretching/singing routine. All eyes were on me trying to see if I could keep up. I was seriously dying laughing inside. I’ve attached some pictures for you. I was told we will begin each morning with the same routine 🙂

My program includes five different exercises each day, which will last for about three hours. After my surgery I am assuming I will spend the second half of the day walking up the hallways.  Most of the exercises range from pull-ups, hip rotation exercises and one hilarious one where they bind your legs on one side and then strap your hands in on the opposite side like a marionette puppet (also, think of a pulley system). Since there are no actual weights to be found anywhere, you pull your own leg weight up and down.  I thought this was quite interesting until about 30 min. later, with no breaks, and I’m still trying to pull my legs up and down. I think they forgot about me for while, because I felt like a dead puppet.  Needless to say I got quite an upper body workout and will continue to do so every morning.

I thought today was done until they broke out the leg braces and told me that I was going to stand for the first time to prepare for walking! The braces went up to my thighs, and then 4 physical therapists stood me up in the walking frame where I stood for about 15 min.  Try to envisage 4 average small Chinese people trying to stand up a 5 ft 9” girl literally twice their size … it was dicey for a few moments there.  They told me I would start slowly and work my way up standing for an hour until my balance got better, at which time I would then begin starting to walk down the hallways! It was a pretty intense day, and I am a little exhausted, but I better get used to it because this is what I’m here for.

All -in-all a pretty intense start to the program, but I would not have it any other way.

I’m working feverishly at improving my Chinese at a rapid pace by asking all the patients what this is and what that is every second. They find it so funny that I constantly study on my Galaxy S3 smartphone.

I just got home from the hospital rehab center and am now waiting on the massive crate my brothers sent over from the United States, which includes my bed, exercise equipment, and boxes and boxes of stuff.  It actually arrived in Kunming over a week ago, but has been stuck in customs.  In hindsight, I didn’t really realize how little “stuff” I use on a daily basis as compared to when I was in the United States.  I think Chinese customs has been our biggest headache yet.  Like everything in China, there is an art to getting things done, and we just have to figure out this particular dance.

Ali in the standing frame for the first time 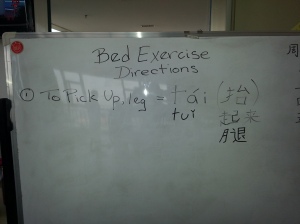 Another lost-in-translation moment -only banana chips inside, but perhaps the packaging can have multiple uses in case they wanted to sell dried pineapple in the future? Another “Chineseism” 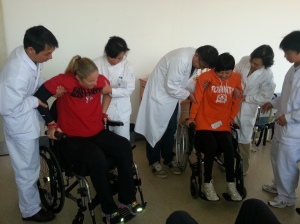